Virtual reality, Augmented reality and advanced inclusive Mix Reality have begun to enter every area of our lives with industry 4.0, although their backgrounds are much greater. 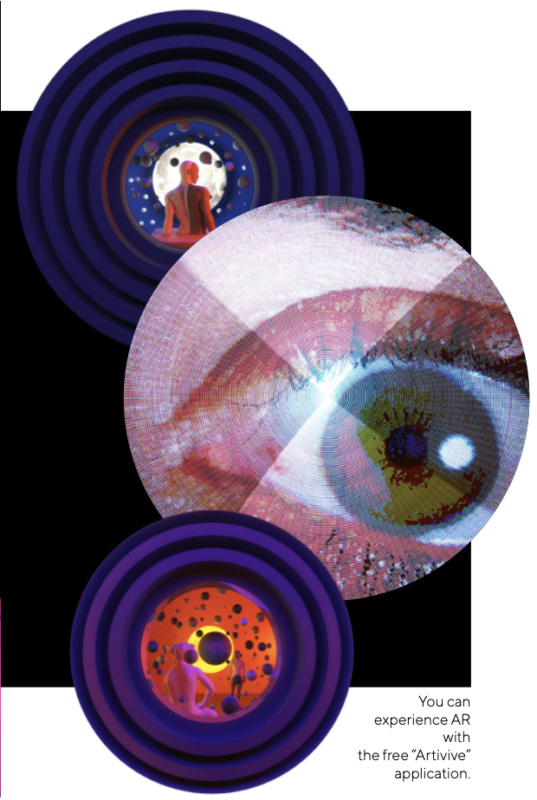 First of all, could you tell us about yourself and your art that you created using technology by starting from the endless universe of the digital world?

I describe myself as a visual storyteller. After my study of Interior Architecture at Bilkent University, I specialized in television studios and I am currently teaching the courses “Designing space for the camera” and “Illusionism in Interiors” at MEF University. My acquaintance with digital modeling and drawing tools is an adventure of almost 15 years. Creating a real television set requires large budgets, but with the 3D modeling programs I use in the visual stories I tell, my budget is unlimited. This freedom gives me unlimited possibilities to tell my stories. My art focuses on archeology, body, gender and architectural relations as someone who grew up in archaeological sites. I do research on queer memory, body and architectural relations. I am trying to transfer it to the future with the stories I witnessed. 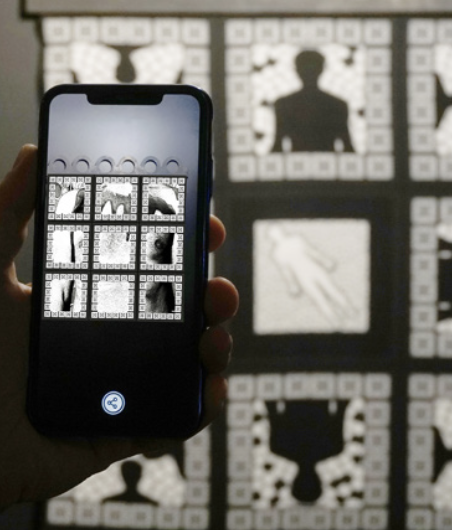 As an artist coming from the disciplines of architecture and design, I take great care of the integrity of concepts and materials. I try to choose materials in which the story and the concept of the series I produce will tell the audience in the most accurate way. My previous series “Gynaeceum – Women’s Center” focused on the public structures that women built with the desire to keep their names alive by nature. The series I prepared with the architectural drawing program AutoCAD was prepared by laser engraving on concrete, wood and clay, which are among the most used materials in architecture. In doing so, I took care to use new tools such as 3D printing, 3D scraping. Because I produced most of the Byzantine women, especially as motifs, based on 14th century sgraffito plates and archaeological finds produced by scraping technique. In my different series, I like to combine the nature of the material and the concept. For example, in the “Horror Vacui, Birth, Life, Death” series that I prepared as a digital drawing and produced on instax films, I tried to convey the chemical nature of instant films, the effort to fill the whole called the unknown and life. The reason I like using ready-made objects is the relationship I establish with the concept most of the time.

Could you tell us about the first personal augmented reality (AR) exhibition “Hamam”, which is composed of digital prints on textiles mostly? 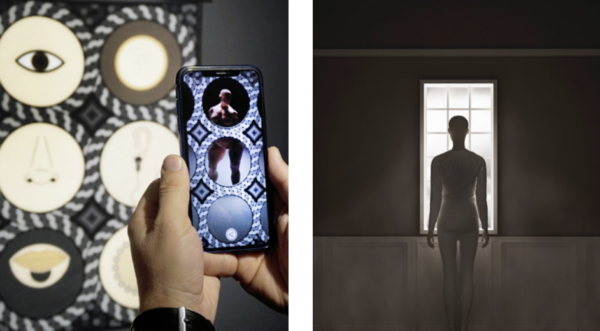 After the series “Gynaeceum”, I continued my intensive readings on body and architectural relations. In-depth examination of body and architectural connections allows me to build ties to our crust from the cave today. I tried to consider the Hamam-Bathhouse as an architectural structure based on these networks. When we say bathhouse, I think we should not only deal with the present day, but also the evolutionary process, in short, thousands of years, the transition between civilizations and the culture of the public structure built for this society. Baths are abundant layered structures where people decompose, socialize and create their own myths throughout the ages. The layers that we can divide as a sense of belonging, unity, equality and cultural geography often give clues about social relations and historical connections, apart from architectural analysis. Bath, an activity in the West that is forbidden in fear by claiming that sins and demons live through body desire, is often used as a healing places in the Ottoman Empire. Nowadays, there were things that I should explain, remind and read through queer culture about the culture of bathing, purification, which has become an artificial and touristic activity in the basements of hotels or historical buildings. The exhibition turned 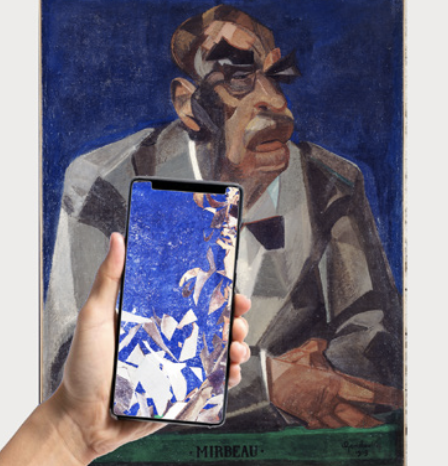 into an experience under the umbrella of all this historical evolution, where concept and material were kneaded together. The reason I call the exhibition an experience is to present a keyhole to the viewer with augmented reality and to watch the story hidden in mosaic patterns that set us boundaries. Mosaics tell us a lot about periods. We can get dozens of clues from a small pattern in an archaeological mosaic discovery. That’s why all the drawings in the bath exhibition were created like a mosaic. They told their own stories in their own past. There is also a great connection between mosaics and pixels that are the essence of digital art. Mosaics have a view of pixeland resolution, such as digital images. The reason the works in the exhibition are textile prints are because of the intense loincloth feeling that I experienced when I entered the bath house, and the loincloth is an unisex pattern, a piece of cloth. Augmented reality, on the other hand, is behind the door of the exhibition. The exhibition, which I devoted to the bath house sections such as warmness, temperature and coldness, was accompanied by 3D animation with Hologram Fan in the temperature section. Anyone who reads this interview can download artivive’s AR app on their phone and watch animations on the images from the hamam-bathhouse exhibition. It’s exciting to provide the mobility of the image anywhere without LED screens.

Augmented Reality, Mix reality is new terms entering the art life. Could you clear them up?

Virtual reality, Augmented reality and advanced inclusive Mix Reality have begun to enter every area of our lives with industry 4.0, although their backgrounds are much greater. Especially AR has begun to adapt to our lives much easier with the axis tools, GPS, cameras on our phones. We can easily create a face filter and see a dinosaur in the place where we look at it with our camera. The moment augmented reality overcomes its disadvantages such as ergonomics, size and heat, its glasses will be a part of our lives in just a few years. World giant companies have begun to create products that are easy to adapt to the moment and space that we are more involved in than the claustrophobic and laborious tools of virtual reality. We started to see very enjoyable VR, AR and MRI experience designs in the world. The reason I like to work on virtual reality is to easily isolate the viewer from the environment. I love the augmented reality so that it can show the audience the other side of the coin rather than creating a moving image. It’s a unique feeling for the viewer to experience the work without breaking away from the place it exists. It’s a different experience that our phones and cameras, which we spend every moment, turn into a tool of looking at a work of art. 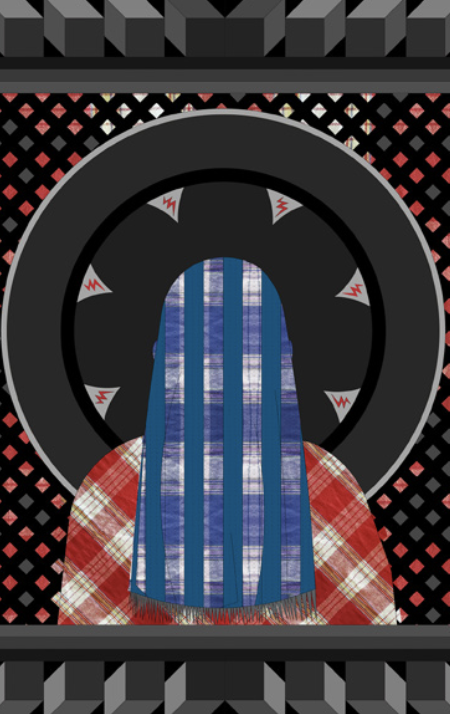 American Arts Incubator is an art program organized by Zero1 and the U.S. Department of State’s Bureau of Educational and Cultural Affairs, offering great opportunities for its participants. We have produced multi-layered works combining art and technology by addressing gender equality and women empowerment under the menate of AAI Turkey Heidi Boisvert and hosted by Inogarart. As a team, we have created a space where we can experience the social pressure that girls suffered 100 years ago and today by focusing on the story of “Eleğimsağma – Rainbow” written 100 years ago by Ömer Seyfettin. We learned a lot as we prepared our experience room with animations animated with Kinect. It was very exciting that the story of the girl, who wished to change a gender due to social pressure, turned into such an experience 100 years ago. Then my journey to San Francisco began. We met there with representatives of the 5 countries where the American Arts Incubator program is underway in 2019. With workshops, field trips, artist workshops and one-on-one mentoring experiences and the Gray Area Art & Technology Festival, where we are participating, we have worked new media arts and new forms of production. I have had significant experience in artworks produced with new tools in workshops where we also experiment with glasses such as Microsoft Hololens and produce content. As someone accustomed to individual production, AAI’s most important contribution to me was the transition to the form of collective production. After AAI, my first exhibition, Hamam, turned into a collective work. Soon after, for Covid-19, we created a 360-degree virtual gallery for Hakan Sorar’s “Through The Skin” exhibition, which will not be performed physically at Pg Art Gallery. Modeled as a new venue and easily toured with VR glasses, the exhibition attracted a lot of attention during the Covid-19 process, where the exhibitions could not be visited. In our country, it is still costly to produce and show technological art works due to infrastructure. I think we need support as digital artists to use licensed products as artists and to have easy access to licenses for all of these products. At the same time, I hope to increase digital art workshops and projects for personal development in the subject of continuously evolving programs, interfaces. 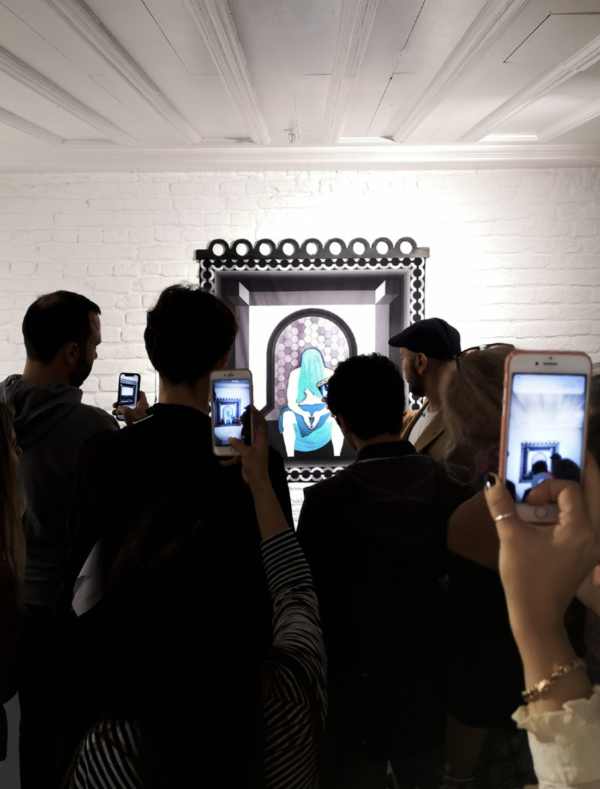 What are the next projects?

My new series “Sauna”, in which I work on behalf of queer memory, body and architecture, again leads us to alternative space readings. The new series, where I will use tools such as VR, AR and hologram, is accompanied by wood and towels as materials. I aim to find the best style to tell my story in the near future, as well as the production sponsorship for my series, which I still haven’t achieved in terms of towel production.